Wasn’t Engeland the origin of football?

Oxford 2014 has been a great experience for all of us. We have received lots of interesting presentations during the IGeLU Meeting and System Seminar, which are now ready for download from either the IGeLU website or the Ex Libris documentation center. Many pictures from memorable social events can be seen on Flickr. But there has been another event, which we did not talk so much afterwards – although it was most important!

During every System Seminar a traditional Ex Libris Customer vs Staff football game is on the agenda. This year, the game took place on Thursday September 18 at 19.00 at the marvelous football grounds of Oxford City Football Club. Everyone was invited to play, men and women, staff and customers. The teams were 10-a-side and the game comprised two halves of 25 minutes. 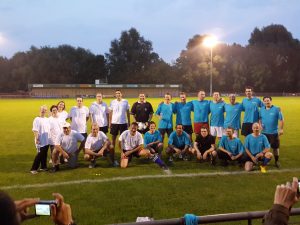 And the winners were…

Unlike the Seminars in Tel Aviv 2009 or Haifa 2011 (where the customer teams have lost ), Ex Libris this year had problems with finding enough people for their team.
Customers on the other hand had enough people to play with substitutes – a fact we were able to take advantage of. And thanks to the massive support of customers fans, the game ended with a
historic victory for the users: 13 – 4! Festivities in the inner city of Oxford were said to have lasted the whole night through….

Today is the last day to submit your ELUNA 2023 Annual Meeting or Developer's Day proposal.
Visit the @elunaorg website to learn more.
http://ow.ly/tTHg50MHZVc

We're excited about this Feb. 3 virtual session, "Entering The New Realm Of Discovery And Interlibrary Loan With Rapido," at the @ONLibraryAssoc (OLA) Super Conference 2023.
http://ow.ly/4Ixc50MIef1

Save the date!
The IGeLU 2023 Conference and Developer’s Day - 11th to 14th of September in Leuven, Belgium.
Conference updates can be found at: http://ow.ly/4INa50MHZ5e

A great example of how to promote #Leganto to those preparing reading lists by the friendly library staff at @monashunilib! Well done!

🗓 Just a reminder from your friendly Monash University Librarians.... with semester 1 around the corner it's time to update your reading lists in Leganto
✅ Big tick if you've already done it and if you haven't, check out our guide 👇
https://bit.ly/40prB19

Join us tomorrow for the ELUNA Learns session on Copyright.

Expand your knowledge and gain insights from your fellow colleagues.