At this year’s IGeLU in Trondheim, two extremely worthy nominees were awarded the Azriel Morag Award for Innovation. They are – Christine Moulen of  M.I.T & Mehmet Celik of KU Leuven, for their invaluable contribution to the Ex Libris user community. 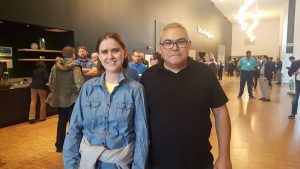 Mehmet Celik of KU Leuven, for his work on jQuery.Primo

Mehmet has worked in library automation for almost 20 years. He is is the author and developer of jQuery.Primo, a library for client side development in Primo, making additional information available and creating new possibilities to customise Primo to local needs. The LIBISnet consortium had many requests for customized interfaces for Primo, but they wished to use their standard interface as much as possible and keep their Total Cost of Ownership low. In their words, “It was Mehmet who came with an open-minded, creative and intelligent approach to solve this equation with what later became the jQuery.Primo library.”

Today more and more institutions worldwide use jQuery.Primo to customize their Primo installation and to better answer the needs of their users. Mehmet’s contribution has been integrated into the standard Primo package since February 2016.

Christine Moulen of M.I.T., for her ongoing contributions to the Aleph community

Of the most valuable contributions to the Global Aleph Users list that we have tracked since 2008, Christine has written 216 of them (about 20%), many in the past two years, on a wide range of topics. Her answers are carefully thought-out, authoritative, and universally considered by Aleph users to be worthy of their attention. In the words of her nominator, “Christine’s innovation is not a one-time creation. It is her day-after-day, week-after-week, year-after-year gift of brilliant and innovative answers and solutions to the Aleph user community.”

Christine has also been very active in the NAAUG and ELUNA user groups, giving an average of two (always well-attended) presentations per year. In addition, she has two popular contributions in the Developer Corner.

Once again, Congratulations to our winners and our community is richer for your contributions.

More details of the award and pictures can be found here : http://www.exlibrisgroup.com/category/2016WinnersAzrielMoragAward

Today is the last day to submit your ELUNA 2023 Annual Meeting or Developer's Day proposal.
Visit the @elunaorg website to learn more.
http://ow.ly/tTHg50MHZVc

We're excited about this Feb. 3 virtual session, "Entering The New Realm Of Discovery And Interlibrary Loan With Rapido," at the @ONLibraryAssoc (OLA) Super Conference 2023.
http://ow.ly/4Ixc50MIef1

Save the date!
The IGeLU 2023 Conference and Developer’s Day - 11th to 14th of September in Leuven, Belgium.
Conference updates can be found at: http://ow.ly/4INa50MHZ5e

A great example of how to promote #Leganto to those preparing reading lists by the friendly library staff at @monashunilib! Well done!

🗓 Just a reminder from your friendly Monash University Librarians.... with semester 1 around the corner it's time to update your reading lists in Leganto
✅ Big tick if you've already done it and if you haven't, check out our guide 👇
https://bit.ly/40prB19

Join us tomorrow for the ELUNA Learns session on Copyright.

Expand your knowledge and gain insights from your fellow colleagues.